Gastroesophageal reflux disease (GERD), gastro-oesophageal reflux disease (GORD), gastric reflux disease, or acid reflux disease is defined as chronic symptoms or mucosal damage produced by the abnormal reflux in the esophagus. It is a condition in which the liquid content of the stomach regurgitates into the esophagus causing inflammation and damage to the lining. . The regurgitated liquid usually contains acid and pepsin which are produced by the stomach may also contain bile that has backed-up into the stomach from the duodenum. The most-common symptoms of GERD are heartburn, regurgitation and difficulty swallowing. Heartburn is the primary symptom and it manifests as a burning sensation that travels up from the stomach to the chest and throat. Risk factors for heartburn are a heavy meal, bending over, lifting, and lying down, particularly on the back. 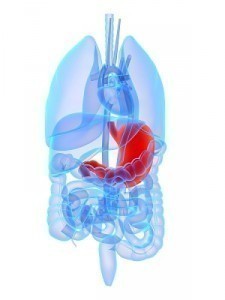 Any injury to the lining of the esophagus results in a chronic condition. Once GERD begins it will be life-long and is usually recurring even after treatment. Once treatment for GERD is begun, therefore, it usually will need to be continued indefinitely although it is argued that in some patients with intermittent symptoms and no esophagitis, treatment can be intermittent and done only during symptomatic periods.

Heartburn or pyrosis is a painful or burning sensation in the esophagus, just below the breastbone caused by regurgitation of gastric acid. Heartburn is not as dangerous a disease as it sounds. The pain often rises in the chest and … Continue reading →

Acid reflux symptoms often manifest mild and minor symptoms. However, the condition still requires treatment and early management as it can cause extreme discomforts with the potential risks to develop into a more severe form of gastroesophageal reflux disease. Continue reading →

By definition Psoriasis is a chronic, non-contagious autoimmune disease (where the body attacks its own cells) that affects the skin and joints and commonly causes red, scaly patches to appear on the skin. The scaly patches also known as psoriatic … Continue reading →