Yawning involves opening the mouth involuntarily while taking a long, deep breath of air. It is a reflex of simultaneous inhalation of air and stretching of the eardrums, followed by exhalation of breath. Yawning is a normal response to fatigue and drowsiness, but excessive yawning can be caused by a vasovagal reaction. This reaction is caused by the action of a nerve, called the vagus nerve, on the blood vessels. It may indicate a heart problem. The act of stretching and yawning at the same time is known as pandiculation.
Yawning usually results from tiredness, stress, overwork, lack of stimulation, and boredom. It is considered as a non-verbal message with several possible meanings, depending on the circumstances. In humans, yawning has an infectious quality (i.e., seeing a person yawning or just thinking of yawning can trigger yawning) which is a typical example of positive feedback. Infectious yawning has also been noted in chimpanzees 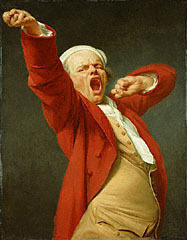 Yawns occur in the first 11 weeks of fetus development and become contagious to people between the first and second years of life. The average duration of a yawn is about 6 seconds. A part of the brain that plays an important role in yawning is the hypothalamus. Research has shown that some neurotransmitters (chemical substances that transmit nerve impulses) and neuropeptides (protein like molecules used for communication) increase yawning if injected into the hypothalamus of animals. Researchers believe that yawning may be like stretching. Yawning and stretching increase blood pressure and heart rate and also flex muscles and joints.
There are many parts of the body that are in action during a yawn. First, the mouth opens and jaw drops, allowing as much air to be taken in as possible. When a person inhales, the air taken in is filling the lungs. The abdominal muscles flex and the diaphragm is pushed down. The air that is breathed in expands the lungs to capacity and then some of the air is blown back out.
Yawning may be linked to brain temperature; developed as a way to “cool” the brain. This would explain why tired people often yawn, since fatigue and sleep depravation increase deep brain temperature. Yawning is believed to be induced when the level of glucose supplied to the brain decreases, as in the state of hunger. It is also thought to be a mechanism of clearing the lymphatic system, mainly before and after sleep.

Definition Eye Twitching, or Blepharospasm, is involuntary eyelid twitching. It is also referred to as an eye muscle spasm. The term blepharospasm really applies to any abnormal blinking or involuntary eye twitching of the eyelids caused by uncontrolled contractions of … Continue reading →

Snoring is defined as a coarse sound made by vibrations of the soft palate and other tissue in the mouth, nose & throat (upper airway). It is caused by turbulence inside the airway during inspiration; the sound may be mild … Continue reading →

What Causes Pain in a Leg?

Definition Trauma is the most obvious cause of leg pain. Falls, near falls, and twisting injuries can damage bones, muscles, and joints or a combination of all three. There are many non-traumatic causes of leg pain. Causes of pain in … Continue reading →

What Causes a Muscle Cramp?

Definition When we use the muscles that can voluntarily be controlled, such as those of our arms and legs, they alternately contract and relax as we move our limbs. Muscles that support our head, neck, and trunk contract similarly in … Continue reading →