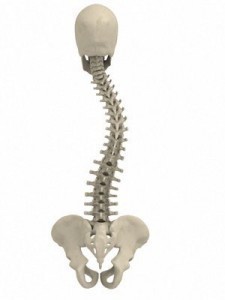 There are three other main types of scoliosis:

In this type of scoliosis, the spine is normal, but an abnormal curve develops because of a problem somewhere else in the body. This could be caused by one leg being shorter than the other or by muscle spasms in the back.

Unlike the other forms of scoliosis that are found in children and teens, degenerative scoliosis occurs in older adults. It is caused by changes in the spine due to arthritis. Weakening of the normal ligaments and other soft tissues of the spine combined with abnormal bone spurs can lead to an abnormal curvature of the spine.

There are other potential causes of scoliosis, including spine tumors such as osteoid osteoma. This is a benign tumor that can occur in the spine and cause pain. The pain causes people to lean to the opposite side to reduce he amount of pressure applied to the tumor. This can lead to a spinal deformity.

Named after the British surgeon, Sir James Paget, Paget’s disease is a chronic disorder that is characterized by deformities in bone structuring and growth during the remodeling process. The process of bone remodeling is essential for normal calcium levels in … Continue reading →

Definition This is a disease that affects the male’s genital organ: the penis, as it often causes deformity of the penis and erections are often very painful. This disease is the development of abnormal scar tissue and /or plaques on … Continue reading →

Upper back pain is a health condition in which patients can experience mild to severe pain between the neck and the lumbar spine on the back. To know the effective treatments for this condition, it is important to know the various symptoms and conditions of the pain. Additionally, it is best to know the different methods used by physicians to diagnose the underlying cause of this condition. Continue reading →

A brain tumor is defined as an abnormal growth of cells within the brain or inside the skull. The growth can be benign or malignant. It is further defined as any intracranial tumor created by abnormal and uncontrolled cell division, … Continue reading →