Acquired Immune Deficiency Syndrome (AIDS) is caused by HIV (Human Immunodeficiency Virus). HIV is differentiated from many viruses because of its lethality. It kills or damages the cells of the body’s immune system, and progressively destroys the body’s ability to fight infections and certain cancers. The immune system is the body’s defense against infections; it is made up of a network of tissues, organs and cells including the white blood cells, or leukocytes. HIV finds and destroys a type of white blood cell (T cells or CD4 lymphocytes) that the immune system must have to fight disease by attaching to the cells, entering them, and inserting its own genetic material. This act leads to severe immune deficiencies.
AIDS is the final stage of HIV infection. At this stage HIV has weakened the immune system to the point where the body is unable to fight infections. The infections coupled with a low number of T cells will eventually lead to AIDS. The timeline for each stage of HIV is dependent on each individual; some persons may live for years with HIV before they acquire AIDS. Today, there are over 33 million people living with HIV/AIDS.
Other sexually transmitted diseases such as herpes, Chlamydia, gonorrhea, and syphilis are risk factors of HIV. 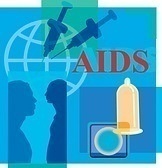 HIV/AIDS can be passed from an infected person to a non-infected person through sexual transmission; that is sexual contact including vaginal, anal or oral sex with an infected sex partner. There is also the possibility of infection from the sharing of sexual devices which contain the fluids of an infected partner.
Sexual transmission starts when HIV infects immune cells in the genital tract or rectum, by passing the physical and non-physical barriers (skin, mucosal membrane and immune defenses). Cells in the genital tract contract HIV and pass it to the lymph nodes, which are hubs of immune activity in the body. Once HIV reaches the lymph node it rapidly infects CD4+ T cells and enters the blood stream infecting the entire body.
The risk of transmission depends on the type of sexual contact, whether the person has other sexually transmitted infections and the amount of virus in the fluids of the HIV infected partner.

HIV can be transmitted through blood commonly by the sharing of syringes, needles or blood transfusion. The Center for Disease Control and Prevention (CDC) reveals that “in the health care setting, workers have been infected with HIV after being stuck with needles containing HIV-infected blood or, less frequently, after infected blood gets into a worker’s open cut or a mucous membrane (for example, the eyes or inside of the nose)”. Persons who share needles in other situations such as drug abuse may also contract the virus if the needle is contaminated with HIV.

HIV can be transmitted from an infected mother to her fetus. Without treatment an estimated 20% of babies from infected mothers will get the virus; the risk is increased in mothers that have a high viral load. Babies can become infected by their mothers at any time during pregnancy; however, chances increase just before or during delivery when the baby is exposed to the mother’s blood. There is also a 14% risk of babies contracting the HIV virus from breastfeeding.

For more information on What Causes Aids read:

Oral thrush occurs when the fungus Candida albicans builds up at the mouth lining. White lesions will appear at the inner cheeks or the tongue. The appropriate thrush treatment will depend on the patient’s age, health status and the cause. … Continue reading →

Herpes is a contagious disease caused by the herpes simplex virus Type 1 and Type 2. The Type 1 virus also causes cold sores on the mouth, face and lips as well as on the genitals. The Type 2 virus, … Continue reading →

Definition Fifth disease is a mild rash illness that occurs most commonly in children. The medical name for fifth disease is erythema infectiosum (EI). It is seen primarily in school-aged children between 5-14 years of age during the spring and … Continue reading →

HIV or human immunodeficiency virus is a severe medical condition that can eventually lead to AIDS or acquired immunodeficiency syndrome in the later stages of the disease. Possible means of transfer include breast milk intake, contaminated needles and unsafe sex. Know more about this dreaded disease by learning its major and minor HIV symptoms, diagnosis as well as treatment. Continue reading →