Lyme disease or borreliosis is an infectious disease that is derived from three specific species of bacteria from the genus borrelia. The strain of bacteria responsible for the infection in the United States is Borrelia burgdorferi sensu stricto while in Europe the strain has been identified as Borrelia garinii and Borrelia afzelii. The disease is transmitted through tick bites from a specific kind of tick, for example the deer tick which contains the bacterium in its stomach. It is the most prevalent tick-borne related disease in the United States and is estimated to affect 17,000 new victims annually.

Lyme disease will produce numerous symptoms that will often resemble those of other diseases. Symptoms will frequently be exhibited weeks after transmission but may take as little as a few days or as much as a few months to appear. It may be asymptomatic in a very few cases.

Symptoms may be categorized into three different stages and will include:

The first symptom will be a circular rash known as erythema chronicum migrans which will be present where the tick bit the skin. It may take anywhere between 3 to 30 days for the rash to develop after being infected. It is usually red and may yield a warm sensation but, for the most part, causes no irritation. This reaction occurs in approximately 80% of infected persons. It is also possible to develop a headache, a fever and muscle soreness and other flu like symptoms during this period. 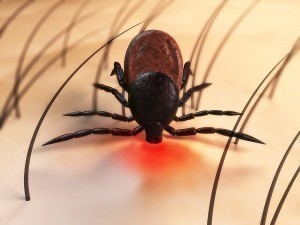 After a few weeks of being infected the bacteria will likely spread to the bloodstream. Rashes will be evident in different areas that are unrelated to the initial area of transmission. In the European strain of the disease it is not unusual to notice a purple coloured lump on the nipple, scrotum or ear lobe. Pain main radiate to the joints, muscles and tendons and dizziness may occur in association with heart palpitations.

If left untreated at this stage neurological problems may arise including: Bell’s palsy which results in the inability to control facial muscles; meningitis: inflammation of the spinal chord; encephalitis which may bring about mood alterations, sleep disturbances and memory loss and radioculoneuritis which causes shooting pains.

Some symptoms associated with neurological disturbances may include:

It is also possible to develop Lyme arthritis which will generally affect the knees and may also affect other joints. The pain may be mild or moderate and may involve some swelling of the joints.

Lyme disease is mainly treated with antibiotics. The type of antibiotic will be dependent on the patient and the progress or stage of the illness. Doxycycline will be given to adults, erythromycin to pregnant women, and amoxicillin to children. The course of treatment will usually last 2 – 3 weeks.

Later stages of the infection will be a bit more difficult to treat . In this phase of the disease treatment will involve the use of ceftriaxone which will be administered intravenously or orally for no less than 4 weeks.

Borreliosis or Lyme disease is commonly caused by various bacteria species including Borrelia burgdorferi sensu stricto. Complications may arise when left untreated, including cognitive defects, chronic joint inflammation as well as facial palsy. People can easily control Lyme disease symptoms if they can familiarize themselves with the right diagnostic procedures as well as possible treatments for this medical condition. Continue reading →

Mercer Disease is a highly infectious disease caused by the bacteria Staphylococcus aureus. It is also known as MRSA which is an acronym for Methicillin Resistant Staphylococcus Aureus. What makes mercer disease so dangerous is the fact that as its … Continue reading →