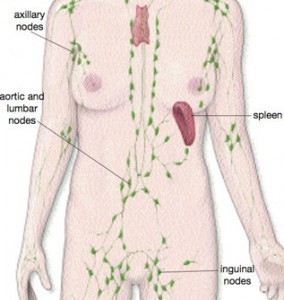 Unlike other cancers, the cure rate is quite high for this health condition. The key is recognizing the symptoms early.

Some of the most common symptoms are weight loss coupled with increased sweating in the evenings. Itching is experienced and there is pain after drinking alcohol. The sensation is felt where the lymph node has grown. As the lymph node grows, it affects other organs. Nerves are pinched resulting in loss of muscle control.

Other major signs include kidney failure and swelling in the back or face. In severe instances the legs are paralyzed. The infection spreads to the liver and causes jaundice. Pain is experienced in these parts of the body.

The immune system is weakened. The individual becomes susceptible to a variety of other illnesses. Breathing difficulties are experienced when the lungs get infected.

Diagnosis consists of two stages. The first consists of tests to determine that the lymph nodes are the problem. Some of the symptoms are found in other cancer forms so these need to be ruled out first.

Once this has been determined, the severity of the disease will be assessed. A biopsy is performed. A tissue sample from the affected area will be taken. This will be examined for caner signs. A CT scan will be done to check if the cancer has infected the chest, abdomen and other vital organs.

A bone marrow biopsy will be performed if it’s suspected that area has been infected. Another diagnostic test is the lymphangiogram. It uses X-rays to determine other areas that have been affected by the cancer.

The diagnosis is critical prior to giving treatment. The extent of the spread will determine the amount of medication to be given. If too much is given, it will cause undue harm to other body organs. There are two treatments available: chemotherapy and radiotherapy.

However they have side effects. These include hair loss and severe nausea. Vomiting and susceptibility to infection is increased. Other possible complications include sterility and heart ailments.

It’s important that the patient is given emotional support during treatment. The process is painful both physically and emotionally. Support is also necessary for the family.

Lymphoma Prevention and Cause

Its exact cause is unknown. All that is certain is that the lymph node grows and may cause pain. It also spreads to various parts of the body. Currently, there is no way of preventing this cancer from occurring. However, living a healthy lifestyle is recommended.

It’s well known that in countries where meat and fatty foods aren’t consumed much, the cancer rates are low. Substituting high cholesterol foods in favor of fiber rich ones is highly recommended. Quitting smoking and reducing alcohol consumption will also help. Engaging in regular exercise will also help.

Even though the treatments are painful, lymphoma can be cured. By recognizing both major and minor symptoms, chances of getting adequate treatment will increase.

For more information on Symptoms of Lymphoma read:

Testicular cancer is one of the leading causes of death among male patients age 15 years to 40 years. To detect the disease in its early stage, patients should have ideas about the minor and major testicular cancer symptoms. Continue reading →

Acute lymphoblastic leukemia is a severe medical problem that commonly affects children. The usual victims of this particular type of childhood leukemia are kids with ages between 4 and 12 years old. People can know more about this chronic blood disorder by studying the different childhood leukemia symptoms, diagnosis and treatments. Continue reading →