A nosebleed or epistaxis is described as a relatively common occurrence of hemorrhage from the nose, usually noticed when the blood drains out through the nostrils. The most common and generally harmless type of nosebleed is known as anterior which originate from the front of the nose; the second more severe type is called posterior, originating from the back of the nose and usually requires medical attention. In some severe cases blood can travel up the tear duct and emerge from the eye and travel down into the stomach. There have been very few cases of deaths caused by severe nosebleeds.

Most nosebleeds can be self-treated. A person suffering from a nosebleed should sit down and lean slightly forward. The head should be kept above the heart to lessen the blood flow. By leaning forward the blood will drain out of the nose instead of down the back of the throat. Lean backwards may result in the swallowing of blood. To stop the nosebleed the soft portion of the nose is held together between the thumb and index finger for a few minutes; applying an ice pack to the bridge of the nose can also help. 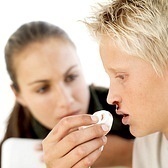 Nosebleeds are generally caused from dryness, nose picking, blunt trauma or other injury, nasal infections and congestion, allergies and colds, dry or cold climate temperatures. The dividing wall at the front of the nose called the nasal septum, consists of thin, flat cartilage and bone, separating the nostrils and nose into its two sides. The septum easily bleeds when impaired in any way. If a person is constantly having nosebleeds it means that some factor may be interfering with the blood clotting or there is some form of constant irritation. In most cases frequent nosebleeds may be due to some underlying condition such as a bleeding disorder, hereditary hemorrhagic telangiectasia or leukemia. Constant nosebleeds causes are

Consistent use of certain blood thinning medications such as aspirin, ibuprofen and warfarin will result in regular nosebleeds.

Continuous picking or irritation of the nasal cavity will cause nose bleeds and the irritated blood vessels may not get a chance to completely heal. As such persons with dry nostrils, colds and allergies will also have frequent nose bleeds; an injured nasal membrane will have constant nosebleeds. The use of cocaine (as in the case of drug abuse) will lead to regular bleeding in the nostrils.

Platelets are one of the components of the blood along with white and red blood cells. They play an important role in clotting and bleeding. If a person’s platelet count is severely low for example less than 20 per micro liter, it can potentially manifest as increase bleeding when a person is cut or injured or during menstruation, or spontaneous bleeding.

Von Willebrand disease is the most common hereditary coagulation abnormality. It is a bleeding disorder that affects the body’s blood clotting abilities. Person with the disease may have low levels of a certain blood clotting protein (called von Willebrand factor) in their blood, or the protein doesn’t work the way it should.

A runny nose is possibly one of the most annoying side effects of the flu or allergy attacks. Also, if runny noses are not tended to properly, nasal discharge can develop into sinus complications, coughing and ear infections which cause … Continue reading →

Internal bleeding is a type of medical condition wherein the patients suffer from bleeding inside their bodies. The treatment, diagnosis and symptoms of internal bleeding are very important because when left untreated, patients can suffer more severe events like cardiac arrest and death. In case of intra-abdominal bleeding, major and minor signs include decreased blood pressure, shock and shortness of breath. Continue reading →

A platelet (also known as thrombocyte) is defined as an irregular, disc-shaped element in the blood that assists in blood clotting. During normal blood clotting, the platelets clump together. Platelets are the smallest of the three major types of blood … Continue reading →

Platelets, or thrombocytes, are described as “small, irregularly-shaped anuclear cells (i.e. cells that do not have a nucleus containing DNA), 2-3 µm in diameter which are derived from fragmentation of precursor megakaryocytes”; megakaryocytes are bone marrow cells and the platelets … Continue reading →