Anorexia nervosa, commonly referred to simply as anorexia, is a type of eating disorder. More importantly, it is also a psychological disorder. Anorexia is a condition that goes beyond dieting. A person with anorexia initially begins dieting to lose weight. Over time, the weight loss becomes a sign of mastery and control. The drive to become thinner is actually secondary to concerns about control and/or fears relating to one’s body. The individual continues the endless cycle of restrictive eating, often accompanied by other behaviors such as excessive exercising or the overuse of diuretics, laxatives, and/or enemas in order to reduce body weight, often to a point close to starvation in order to feel a sense of control over the body. This cycle becomes an obsession and in this way, is similar to any type of addiction. 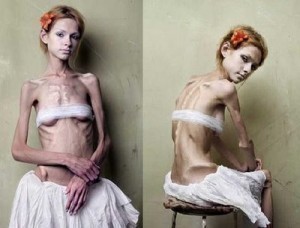 In many societies, being extremely thin is the standard of beauty for women and represents success, happiness and self-control. Women are bombarded with messages from the media that they must diet to meet this standard. However, this idealized ultra-thin body shape is almost impossible for most women to achieve since it does not fit with the biological and inherited factors that determine natural body weight. This conflict leaves most women very dissatisfied with their body weight and shape.
More recently, pressure has also increased on men to be lean and muscular.

Psychological characteristics that can make a person more likely to develop anorexia nervosa include:

People with anorexia nervosa often appear emotionally driven not only toward weight loss, but also in other areas of their life, such as schoolwork, physical fitness, or career. It has also been suggested that in some cases of anorexia nervosa, self-starvation may be a way to avoid the sexual and social demands associated with adolescence.

Some family styles may contribute to the development of anorexia nervosa. Families of people with the disorder are more likely to be:

Life transitions can often trigger anorexia nervosa in someone who is already vulnerable because of the factors described above. Examples include:

Dieting and losing weight can also set off anorexia nervosa.

Once anorexia nervosa has developed, several factors can perpetuate the disorder. These factors include:

Binge eating is a serious disorder and left untreated can lead to different health problems. For this reason, eating disorder treatments must be seriously considered. Because people afflicted with this condition often have feelings of guilt, the emotional well being … Continue reading →

Weight loss is defined as a persistent decrease in body weight resulting from either voluntary (diet, exercise) or involuntary (result from medical conditions such as cancer, rheumatoid arthritis and malabsorption) circumstances. In most cases, weight loss is attributed to the … Continue reading →

Definition Belly fat, colloquially known as abdominal obesity or clinical as central obesity, is the accumulation of visceral fat resulting in an increase in waist size. There is a strong correlation between central obesity and cardiovascular disease. Men and women … Continue reading →