Sinuses are defined as paired air cavities / spaces (pockets) found in the cranial (head) bones. Sinuses are also referred to as “paranasal sinuses”. They are connected to the nose on the facial part of the skull where air passes and mucus drains. There are four pairs of sinus cavities and each cavity opens into the nasal passage so that air and mucus can pass. Unclean mucus travels from the sinus cavities into the nasal passages. Sinuses help to insulate the skull, reduce its weight and allow the voice to resonate within it. They also protect against viruses and bacteria. 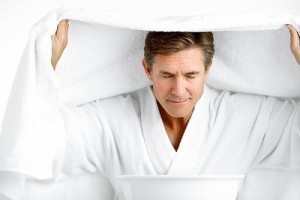 Sinus infection, or sinusitis, is an inflammation or infection of one or more of the paranasal sinuses caused by bacteria that has traveled from the nasal passages. Sinusitis can result in headaches or pressure in the eyes, nose, cheek area or on one side of the head. It can also cause coughing, fever, bad breath and nasal congestion with thick nasal secretions.
Sinusitis is categorized as acute or chronic which is the most common type. Acute sinusitis will last eight weeks or less or occur for a maximum of three times per year with each episode lasting no longer than 10 days. Acute sinusitis may be caused by a viral infection in the upper respiratory tract, or from allergies.
Chronic sinusitis lasts longer than eight weeks or occurs more than four times per year with symptoms usually lasting for more than 20 days. Bacteria and fungi (especially in persons with a weakened immune system) are involved in chronic sinusitis.

Recognition of sinusitis symptoms increases the chance of it being cured immediately. Assess the symptoms of sinusitis and take the appropriate medications. Continue reading →

Treating sinus pain effectively requires knowledge of the facts. Assess facts about sinus pain and use the right methods for fighting the ailment. Continue reading →

Often, sinus infection treatments are not necessary as they are frequently brought about by cold. But if the condition persists, any of the following may be recommended by your doctor to lessen the symptoms. Nasal Sprays Saline nasal sprays are … Continue reading →

A runny nose is possibly one of the most annoying side effects of the flu or allergy attacks. Also, if runny noses are not tended to properly, nasal discharge can develop into sinus complications, coughing and ear infections which cause … Continue reading →