This refers to diseases of the blood vessels outside the heart and brain. It is often a narrowing of vessels that carry blood to the legs, arms, stomach or kidneys. There are two types of these circulation disorders

The Peripheral Artery Disease (PAD) is a condition similar to coronary artery disease and carotid artery disease. In PAD, fatty deposits build up in the inner linings of the artery walls. These blockages restrict blood circulations, mainly in arteries leading to the kidneys, stomach, arms, legs and feet. However, it includes all diseases caused by the obstruction of large arteries in the arms and legs.

PVD is a result from atherosclerosis, an inflammatory process that leads to stenosis, an embolism or thrombus formation.
Internationally, Smoking of the tobacco is the single most important thing that cause PVD. Smokers are at risk and are prone to be affected. Also exposure to second hand smoke from environmental exposure has also been shown to promote changes in blood vessels lining which is a precursor to atherosclerosis. Other causes include 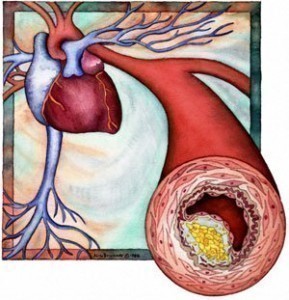 The prevalence of peripheral vascular disease in people aged over 55 years is 10% -25% and increases with age 70% -80% of affected individuals are asymptomatic, only a minority ever requires revasculation or amputation.
Also, many PVD patients also have angina pectoris or have had myocardial infarction. There is also an increased risk for stroke. The moderate consumption of alcohol has been found to be associated with a reduction of the risk of PVD by almost one third compared to those who do not drink alcohol.

Definition Peripheral Artery Disease is the type of disease is a form or type of Peripheral Vascular Disease, where there is either a partial or total blockage of a particular artery, which in most cases is usually an artery leading … Continue reading →

Atherosclerosis is a disease in which plaque builds up on the insides of your arteries. Arteries are blood vessels that carry oxygen-rich blood to your heart and other parts of your body. The Plaque is made up of fat, cholesterol, … Continue reading →

Definition of Coronary Artery Disease Coronary artery disease (CAD) occurs when the arteries and blood vessels that supply the heart with blood and oxygen begin to narrow affecting the functioning of the heart . This develops as a result of … Continue reading →