Myocardial ischemia is an ischemic disease involving reduced blood supply to the heart. The most common cause for this condition is coronary heart disease mostly involving the hardening of the blood vessel walls due to plaque build ups resulting to a condition called as atherosclerosis.

Other predisposing factors that can cause myocardial ischemia symptoms to occur are medical conditions such as diabetes mellitus, hypercholesterolemia where there is increased level of cholesterol and hypertension caused by high level of blood pressure. Smoking also plays a role in the development of myocardial ischemia.

Identification of the common myocardial ischemia symptoms is necessary in order to obtain preventive measures that can predispose one to sustain a more serious complication of heart diseases that may lead to stroke, cardiac arrest or death. 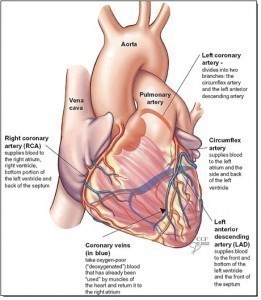 There are different kinds of manifested myocardial ischemia symptoms according to the extent of blockage of blood supply to the heart. Minor myocardial ischemia may involve mild symptoms of angina or chest pain with decrease level of tolerance to exercise or rigorous activities.

Major myocardial ischemia symptoms usually involve a sudden cardiac arrest or arrhythmia where there is an abnormal heart rhythm. The person may also faint and in major cases, the attack may lead to a sudden death.

Establishing a diagnosis for myocardial ischemia symptoms usually involves basic laboratory tests to determine whether the symptoms are due to ischemia of the heart. This usually involves electrocardiogram, chest x-rays, coronary angiogram, and blood tests. These are complimentary diagnostic tools along with the thorough medical examination and medical history carried out by a physician. The patient is also subject to cardiac stress test.

The physician will often rule out other possible conditions that may mimic the myocardial ischemia symptoms and to establish other differential diagnosis. The risk factors that may predispose one to the myocardial ischemia symptoms are also explored and addressed including family history, history for smoking, high cholesterol, sedentary lifestyle, hypertension and diabetes.

Medication is the first line of treatment option for the management of myocardial ischemia symptoms. Stable angina is treatable with antianginal drugs that can reduce the occurrence of chest pain.

The distressing angina symptoms may also indicate the presence of more serious medical conditions such as heart ailments. Proper diagnosis and treatment to relieve the symptoms of angina are vital to provide better relief from the discomforts that may occur with angina symptoms. Continue reading →

Atherosclerosis is a severe disease caused by the buildup of fatty materials in the human body. As a result, this medical condition can lead to the furring or hardening of the arteries. Defend yourself from the minor and major atherosclerosis symptoms with the help of proper diagnosis and appropriate treatments. Continue reading →