Morgellons Disease or Morgellons Syndrome  refers to a condition that is referred to by the Centers for Disease Control as an unexplained dermopathy. It is characterized by a range of skin-related symptoms such as crawling sensations on and under the skin, fibers on or under the skin and lesions or rashes that are persistent. There is question as to whether this newly identified disease is actually a new disease, because of its similarity to another existing condition known as Delusional Parasitosis. Due to the debate as to whether this is a new disease, treatment may not come easily, and as such, some patients have done self-treatment that can prove to be quite dangerous. Some of these include the use of bleach and pest insecticides and other industrial chemicals.

Due to the many unanswered questions surrounding Morgellons Disease, it is not recognized as a unique disorder, so there is currently no list of symptoms for Morgellons that is generally accepted by the medical community. For this reason, patients usually self-diagnose themselves based on media reports and the Internet. The following list includes some of the possible symptoms of Morgellons Disease. 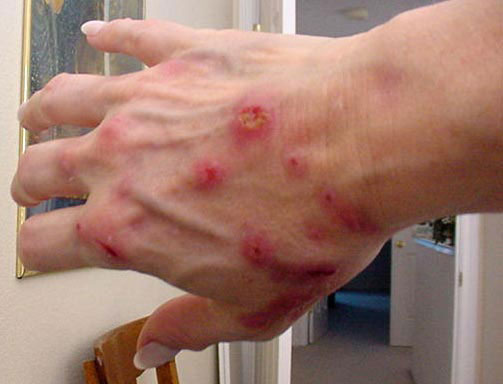 As for possible causes of Morgellons Disease, it is still not known. In the case of Delusion Parasitosis, it is believed that the disease is caused by allergies, diabetic neuropathy, menopause, skin cancer, drug abuse or herpes zoster. Symptoms associated with Delusional Parasitosis, such as paresthesia (unexplained tingling sensations in the skin), urticaria (skin lesions), and pruritis (itching), are said to be common side-effects of many prescription drugs or drug abuse.

Due to the similarities between the symptoms of Morgellons Disease and those of Delusional Parasitosis, it is often hard to prescribe medication for treatment. This is more so as patients tend to be offended and refuse the medications when they are prescribed psychotropic medicines to cure Delusional Parasitosis.
Some doctors have hypothesized that Morgellons is the result of an infectious process, and they recommend the use of antibiotics, antifungals, antiparasitic medications, herbal supplements and light therapy.
Some Morgellons patients who test positive for Lyme disease obtain symptom relief using aggressive, long-term antibiotic treatment, similar to what is used by some doctors to treat “chronic” Lyme disease, another skin condition. The antibiotic treatment is not curative, because when it is discontinued, the symptoms have returned. Some dermatologists believe that the positive effects of antibiotic use for some patients is probably the result of a placebo effect. It should be noted that long-term antibiotic use can have serious side effects.

Lyme disease or borreliosis is an infectious disease that is derived from three specific species of bacteria from the genus borrelia. The strain of bacteria responsible for the infection in the United States is Borrelia burgdorferi sensu stricto while in … Continue reading →

Pelvic inflammatory disease (PID) is infection of a woman’s reproductive organs. Infection spreads upward from the cervix to the uterus, fallopian tubes, ovaries, and surrounding structures. Bacteria can infect the fallopian tubes and cause inflammation. When this happens, normal tissue … Continue reading →

Crohn’s Disease or granulomatous colitis or regional enteritis is a disease that causes inflammation within the intestines. Inflammation may occur in any part of the gastrointestinal tract. It is associated with symptoms such as diarrhea, abdominal pain, weight loss, skin … Continue reading →

Definition Valvular heart disease is a disease that affects at least one or more of the valves within the heart. The heart maintains four types of valves: the pulmonary and tricuspid valves on the left and the aortic and mitral … Continue reading →