Mad cow disease or Bovine Spongiform Encephalopathy (BSE) is a fatal neurodegenerative disease found in cattle that leads to a spongy degeneration of the brain and spinal chord. The incubation period is considerably long and affects adult cattle. All breeds are vulnerable to getting the disease. As the disease progresses, the animal is likely to behave in an odd manner including having an inability to stand because of irreversible brain degeneration. The disease appeared fairly recently and has been determined to have begun because cattle were being fed the remains of other infected animals, mainly sheep and other cattle. However, the true origin of the disease has still not been discovered.

Mad cow disease can be transmitted to humans in the form of a new variant Creutzfeldt-Jakob disease or vCJD. It is transmitted to humans when infected meat from cattle is consumed by them. Unfortunately, cooking the meat does not necessarily destroy the prion as it is able to survive even relatively high temperatures. Prion refers to the abnormal protein in the brain that can cause vCJD. Due to its presence, the cells in the brain begin to degenerate and eventually, it begins to have a sponge-like appearance. It has been responsible for almost two hundred deaths worldwide with the majority of deaths occurring in Britain.

As mentioned earlier, research is still being conducted to find the cause of mad cow disease. Having said that, it is believed that the consumption of infected meat can lead to this disease. Studies are being conducted to determine if heredity or genetic factors offer protection or make animals more susceptible to this disease. Creutzfeldt-Jakob disease is a prion disease meaning that it is caused by an infection with a prion (a misfolded protein) which is neither bacterial or viral in origin. Research is being conducted in this regard also to find the actual origin of this disease. A possible cause is the consumption of infected meat. 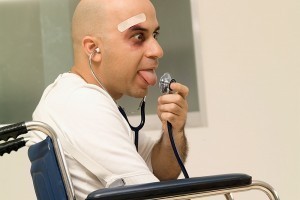 The incubation period of mad cow disease is considerably long.

Some of the symptoms of mad cow disease when manifested in animals include:

The symptoms manifested in human beings include:

The disease may have varying duration periods, however, the sporadic forms of the disease tend to have a relatively shorter incubation period and cause more rapid degeneration of the brain and spinal cord tissue.

The symptoms manifest themselves as a result of nerve cell death, related to the accumulation of prions. It has been observed that when viewed under a microscope, the brain tissue removed from persons afflicted with the disease, contains many tiny holes in place of the nerve cells that have died. The brain tissue will be sponge-like because of the progressive deterioration.

There is no cure for vCDJ and it is usually fatal within months or years after the onset of symptoms. Treatment may be given to alleviate some of the associated symptoms but this will not slow or prevent the progress of the disease. Tests are being conducted in laboratories and ongoing research is being conducted to determine the causes of prions in animals.

The following preventive measures can be taken to avoid getting afflicted with the mad cow disease.

Degeneration of the intervertebral disc, often called “degenerative disc disease” (DDD) of the spine, is a condition that can be painful and can greatly affect the quality of one’s life. While disc degeneration is a normal part of aging and … Continue reading →

Definition This is a disease that affects the male’s genital organ: the penis, as it often causes deformity of the penis and erections are often very painful. This disease is the development of abnormal scar tissue and /or plaques on … Continue reading →