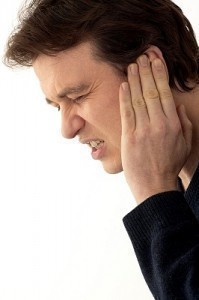 A narrow tube called the Eustachian tube connects the middle ear with the back of the nose and allows normal fluid drain out of the middle ear. If bacteria or viruses infect the lining of the Eustachian tube, the tube gets swollen and fills with thick mucus. This keeps fluid in the ear from draining normally. The fluid begins to buildup and bacteria can grow in the fluid, increasing pressure behind the eardrum and causing pain, stuffiness, hearing loss, and ear infection.

An earache is described as a temporary or constant sharp, dull or burning pain in one or both ears. In children ear pain is usually caused by the buildup of fluid and pressure behind the eardrum (middle ear). In adults ear pain is largely due to an ear infection

The Eustachian tubes can become blocked because of allergies, a cold or other infection due to inflammation and the buildup of secretions. This is more common in small children, because they have a shorter and more horizontal tube.

Hearing refers to the ability to perceive sound by detecting vibration in the ear. The ear has three sections, the outer, middle, and inner ears, all work together to process sounds. The outer ear consists of the lobe and ear … Continue reading →

Definition Conductive hearing loss happens when there is a problem conducting sound wave through the outer ear, tympani membrane (eardrum) or middle ear (ossciles). This type of hearing may occur in conjunction with sensorineural hearing loss or alone. External ear … Continue reading →

Tinnitus is the perception of sound in the ears or head where no external source is present. It is referred to as “ringing in the ears” or “head noise.” The sound heard by persons with tinnitus can only be heard … Continue reading →

About High blood pressure or hypertension is a very serious condition that may lead to heart attack, stroke, kidney failure among other life threatening conditions. It is important to seek medical advice once you are stricken with this condition. Because … Continue reading →